The first church was founded by Guifré el Pelós in 879. It reached its highest splendor when it was under the dominion of Abat Oliba. Inside is the most important and well-preserved Romanesque element, the portal, built in the 12th century. It is known as the Stone Bible; you can also find the tombs of Count Guifré el Pelós and Ramon Berenguer III, among others. Above the altar there is a mosaic of Virgin Mary and in Saint Joaquim’s chapel, Sant Eudald, the patron of Ripoll. The cloister, with two floors, is situated at the south of the church. It was built in three different stages. The most relevant was the construction of the North aisle with richly decorated capitals from the 12th century. Then came the restoration of the 19thcentury in neo-Gothic style.

The Ethnographic Museum of Ripoll is the first ethnographic museum of Catalonia. Opened in 1929, it gathers a large and interesting collection of tangible and intangible heritage, which includes pieces related to shepherds, peasants, popular religiosity, ironwork, the Catalan forge and the firearms from Ripoll. The exhibition invites visitors to take a tour, interesting both for adults and for children, that reveals the past and the identity of our region as well as the way of living and feeling.

During its long history, Ripoll has been a cradle of proto-industrialization in Catalonia, for a variety of industrial activities have been carried on there. The Farga Palau in Ripoll is one of the last examples of a historic industry, the Catalan forge, that played a very important role in industrial development of iron-working in the 17th and 18th centuries. Amongst the most important item. 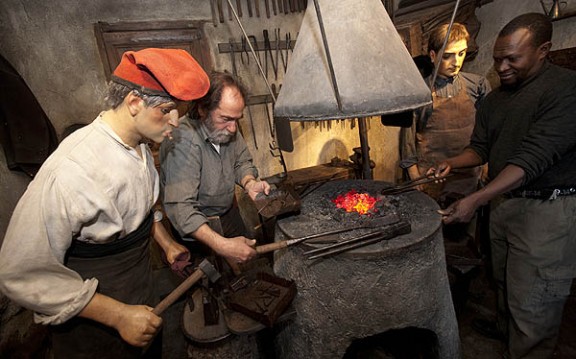