With a budget of 4.6 million euros, the project is co-financed with European funds

This Thursday, the offices of the Regional Council of the Alt Empordà have seen the presentation of the project known as “EFA 156/16 BICITRANSCAT. Development of new cyclable and multimodal cross-border links to promote sustainable mobility”. The presentation was made by Joan Cano, Regional Councillor for Tourism, and Albert Gómez, president of the Girona Greenways Consortium. The act was attended by Véronique Olier, representing the Perpignan Méditerranée Métropole, Robert Garrabe, Vice President of the General Council of the Pyrénées-Orientales, and Francesc Cruanyes, Deputy Mayor of the Figueres City Council.

The project has a budget of 4,689,269.25 euros, co-financed with 65% of European Regional Development Funds (FEDER), through the INTERREG V-A Spain-France-Andorra Programme (POCTEFA 2014-2020). The objective of POCTEFA is to strengthen the economic and social integration of the cross-border area linking Spain-France-Andorra. The funding is focused on developing cross-border economic, social and environmental activities through joint strategies aimed at promoting sustainable territorial development.

During the presenation, the Regional Councillor of Tourism, Joan Cano, explained that “the project presented today has its origins in the ENLLAÇ cross-border project, which resulted in the creation of the cyclable cross-border route known as PIRINEXUS. The success of this experience encouraged the partners to collaborate once again and to apply for European funding for POCTEFA cross-border projects during the 2014-2020 period. The BICITRANSCAT project to develop new cyclable routes and multimodal links was approved in 2017 and the different stages of the project are expected to be developed until the year 2020.”

He also added that BICITRANSCAT “responds to a need in the region to improve sustainable mobility options, while also offering a new infrastructure for the development of active and nature tourism. This kind of tourism has grown over recent years across the country and, at a regional level, we are lucky to have multiple resources to enable us to develop it. It is also very gratifying to be able to participate in a cross-border project that fosters relations with our neighbours and gives us the opportunity to work to develop both territories. Understanding the cross-border nature of the region as a tourist resource, understanding that this makes us stand out in a way which is different to other regions, should help give added value to the tourism on offer in the Alt Empordà. I’m convinced that the BICITRANSCAT project will help give it this added value, being built, at the same time, on a solid model of sustainable tourism.”

Five partners participate in the initiative: the Girona Greenways Consortium, leading the project, the Figueres City Council, the General Council of the Pyrénées-Orientales, the Perpignan Méditerranée Métropole, and the Alt Empordà Regional Council. The ultimate aim of the project is to link the tourist destinations of the province of Girona with those of the Pyrénées-Orientales Department, through a cycling network interconnected to different modes of public transport.

Albert Gómez, President of the Greenways Consortium, emphasised that “BICITRANSCAT is the continuation of another European project that enabled us to create the PIRINEXUS route in 2013. Today, this route is well-known across Europe, with its western side being part of the large Mediterranean European route known as Eurovelo 8.  Pirinexus stands out for being an extensive circular route, taking in a variety of different landscapes. BICITRANSCAT will help to continue this consolidated model and to respond to the need to improve this proposal in the region of the Alt Empordà, also improving connectivity with French Catalonia. The proposal is not merely touristic, but also promotes sustainable mobility.”

Going on to explain specific aspects of the project, Gómez indicated that “the objective is to create a complementary route to the existing PIRINEXUS and EUROVELO 8 routes, from Castelló d’Empúries to Perpignan by the coast. This will enable a cross-border cyclable network which is connected to public transport, promoting sustainable mobility and providing a coastal route that offers an alternative to the roads that are often overcrowded during summer months. At this moment in time, we are working to complete the route, planning the final trajectory alongside the Parc del Cap de Creus and different town councils from the Alt Empordà (Figueres, Llancà, Port de la Sevla, Roses, Castelló d’Empúries), in order to find the most suitable stretches for the project. Once defined, the route will be adapted to the cycling network and the corresponding signage will be put up at each stage of it”.

The president of the Greenways Consortium added that “given the geography of the area and the existing stretches available, this cyclable route will be connected to different public transport options to enable connections with the main touristic destinations (Figueres, Llançà, Portbou, Perpignan) via bus and train lines. To be able to create this link with public transport, bike supports will be installed on buses and bike racks at the main bus and train stations. An application and a website will also be created to be able to consult the cyclable route, the existing bus and train stations on the route, as well as timetables for these services.

Francesc Cruanyes, Deputy Major of the City Council of Figueres, highlighted the “firm commitment of the city for this environmental, cross-border and transversal project. For us, this involves completing our cycling network as an element of sustainability and, at the same time, a tourist attraction. Robert Garrabe, Vicepresident of the General Council of the Pyrénées-Orientales, emphasised “the commitment of the Council to this project that will develop the territory touristically and economically in a sustainable way, while also creating jobs”. Representing the Perpignan Méditerranée Métropole, Véronique Oller also expressed “our satisfaction on being able to take an active part in this initiative which will help promote tourism in Perpignan and Figueres, as well as their respective outlying areas”.

During the presentation, the speakers also explained that the project will be presented at the main international and national hiking and cycling fairs to promote the new route and raise awareness of it. Next year the plan is to present it in Utrech, Touloussse and Stuttgart. In 2020, presentations will be made to the press and to tourist operators, and competions and instagrammer meetings will also be organised to promote the route among users and people who live in the area.

To achieve all this, the “BICITRANSCAT” project has a budget of 4,689,269.25 euros, co-funded by the European Regional Development Fund (FEDER), through the Interreg V-A Spain-France-Andorra (POCTEFA 2014-2020) programme (65%), the Regional Council of Girona (25%), as associated member of the project, the self-funding of 10% by each Catalan partner, and 30-35% of self-funding from the French partners. 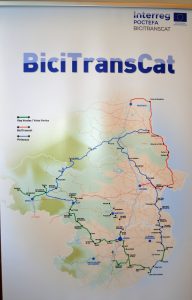