The importance of the flour and drapery mills in Sant Feliu de Pallerols has been crucial for the whole country since ancient times. Sant Feliu was known as a “land of the mills”, given the richness that the abundance of water represented at that time, and due to the use made of it in industrial processes.

References to El Molí de la Conqueta are first found in 1310 and the site is of vital interest in the study of the evolution of the urban nucleus of Sant Feliu de Pallerols. Although the mill was already dedicated to flour and drapery production in 1533, we have no news of it until 1649, when the town of Sant Feliu extended its urban area. In the early years it was a simple flour mill powered by the hydraulic power of the water collected some metres above by a small dam known as “La Conqueta”, from where it was piped to the mill through an irrigation ditch built on the right-hand side of the river. It was used for this purpose until the 1960s, when it was closed down.

Its history is closely tied up with the town of Sant Feliu de Pallerols and La Vall d’Hosteles in feudal times, taking in the long conflict of the remences. It is because of this that its restoration will allow present and future generations to discover what the place was like “in situ”, what it was used for, and how such important instruments – as were the flour and drapery mills – functioned in medieval life and how they contributed to the active formation of the emerging Catalonia.

The Conqueta mill was inaugurated on 18 December 2011 on the occasion of the Fair of Santa Llúcia and is open to visitors.

Situated on a rocky hill at a height of 590m, this is an architectural compound which is emblematic of the history of Catalonia. An imposing medieval fort, restoration work is under way today to preserve and consolidate it. Some abodes and walls can still be appreciated, as well as the Torre de l’Homenatge and a magnificent 13th century cistern, providing a privileged 360º view across La Vall d’Hostoles.

The territorial Castle of Hostoles was a power centre of the Feudal lord. As well as governing La Vall, the Feudal lord was also the owner of many estates and lands within and beyond La Vall and his power over his subjects had no limits. At the end of the 12th century, many of the Feudal lord’s serfs were peasants forced to live in the estates.  Gerald de Rocabertí was the last Feudal Lord of La Vall, after King Alfonso V of Aragon declared La Vall d’Hostoles royal land, with the power to elect consoles and councillors. La Vall d’Hostoles takes in the upper basin of the River Brugent, and forms three lateral valleys: Sant Iscle de Colltort, Aiguabella and Cogolls.

The remains of the Castle d’Hostoles that can be seen today are of the Remença Castle built by Verntallat in the 15th century. Nevertheless, the castle is clearly much older than this. The castle was much smaller when Eneas Miró negotiated with the Count of Barcelona in 1060, but at that point it already had outer fortifications.

The great fault of d’Hostoles and the secondary faults associated with it led to the volcanism that affects La Garrotxa, La Selva and L’Empordà. In La Garrotxa, volcanic activity is concentrated in the basin of the River Fluvià, within the area of Olot, as well as the basins of the rivers of Llémena and Brugent. Sant Feliu has a significant presence of volcanoes: Fontpobra, La Tuta and Can Tià in Sant Iscle de Colltort (in the Natural Park of the Volcanic Zone of La Garrotxa), Sant Marc or Artigues Roges and Puig Roig right in the centre of the fault of d’Hostoles. We can also find the Traiter volcano.

The Sant Marc and Puig Roig volcanoes are the most modern ones of La Vall d’Hostoles, dating back around 30-28,000 years. They can be found at the foot of the Serra de la Salut, on the right-hand side of the River Brugent. The Sant Marc or Artigues Roges volcano has a relative height of 130 m. Its crater is in the shape of a horseshoe, with a NE incline. It is a mixed type of volcano, created in three stages, finally producing a stream of lava that flowed down the slope until reaching the Pla de la Vall.  A small chapel with the image of the saint can be found at the site of the Sant Marc volcano. The Puig Roig volcano was one of the main quarries from which most of the paving stones used in the town were extracted at the beginning of the century. It is currently in a considerably dismantled state, although we can still see the chimney of the volcanic cone thanks to the solidification of its lava.

Itinerary 22 gives us the chance to discover the two volcanoes found near the town of Sant Feliu de Pallerols and which are also the furthest away from the central nucleus of the Volcanic Zone of La Garrotxa where the most recent volcanism is concentrated. This route crosses the summit and crater of the Sant Marc Volcano, where we can observe the Brugent fault responsible for volcanism in La Garrotxa. The final circular stretch of the route, within the Puig Roig volcano, offers us a view of the basalt quarry of the Sesquer, and also the old clay-pit of Sant Marc, an old clay-pit that demonstrates the different layers of materials produced by the volcanic eruption. 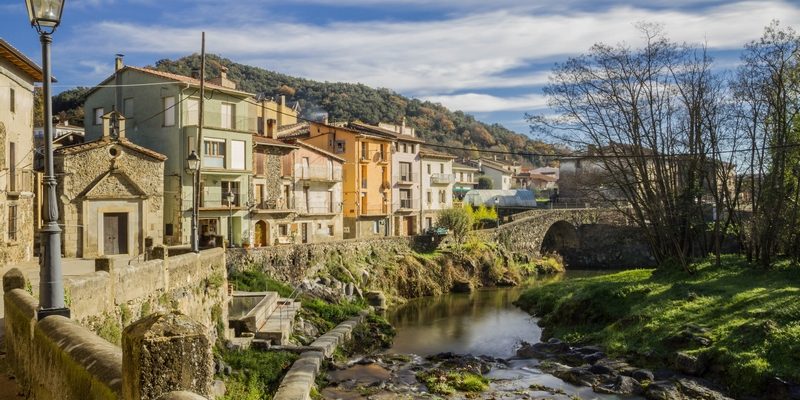