In the year 904, the Bishop of Gerona, Servos Dei consecrated a church dedicated to Saint Peter in the Camprodon area. Between 948 and 950 (approx.), Count Wilfred II of Besalú, built it into a Benedictine monastery. The abbot and the nuns were the main organizers of the growth in population and the economy in Camprodon between the 10th and 12th centuries. In 1078 Count Bernat II joined it to the Occitan monastery of Moissac, and this dependence lasted almost four centuries until 1461. The church, with its Latin cross-shaped plan and one single nave with a pointed vault roof and dome in the transept, was consecrated on 13 November 1169. It was restored in two phases, the first phase began in 1898 (A. Serrallach) and the second took place from 1932 to 1933 (J. Martorell), which gave the building its current appearance. Wars and expropriations have meant that it has lost its monastic complex forever. Some capitals of its Romanesque cloister support the Parish church’s main altar.

From the years 1924-1925 onward, construction of second homes by holidaymakers in Camprodon, mainly people from Barcelona, moved from Passeig de la Font Nova to Passeig Maristany (Maristany Promenade). Construction of this promenade was carried out on the land of Aulí house, a country house that Francesc Maristany (1849-1929) had bought, so he could build a family house there. Despite that, Francesc Surinyach, a contractor and master builder, convinced Maristany that, in addition to building its tower, he should encourage wider urban development. Authorship of the project is attributed to the architect Bernardí Martorell (1877-1937), who came up with the idea of a wide central promenade, flanked by rows of trees and a slight curve, which allowed him to recreate the sensation of infinitude that can be felt in the heart of the mountains.

Enrique Sagnier (1858-1931), Raimon Duran y Reinals (1895-1966), Josep Antoni Coderch (1913-1984) and Francesc Mitjans (1909-2006) are some architects that designed these distinct houses. Among them stands out the García tower, where Juan Negrín took refuge at the end of the Civil War, or the country house named Vora del Ter, which has a small romantic church and cloister from the village of San Esteban de Gormaz in the province of Soria.

In old documentation it is called the “Pont Nou” (New Bridge) as opposed to the “Pont Vell” (Old Bridge), a stone bridge with two arches destroyed in the Civil War in 1939. A reconstruction of the Pont Vell still crosses the River Ritort near the crossroads at Valencia street.

Although it is popularly called “Roman bridge” or “Romanesque bridge”, the construction measures around 20 x 14 m and its building began in 1315. It was perhaps restored in 1362 as a result of the earthquake in the year 1428 it suffered some damage. Destroyed during the Catalonian Civil War (War of the Remenses in the second half of the 15th century), it was rebuilt with many modifications made to it in subsequent centuries. The fortified entrance is known as the gateway to the Cerdanya area, because it was the final point on the Royal Road coming from the counties in the high Pyrenees in the direction of the Gerona coast. 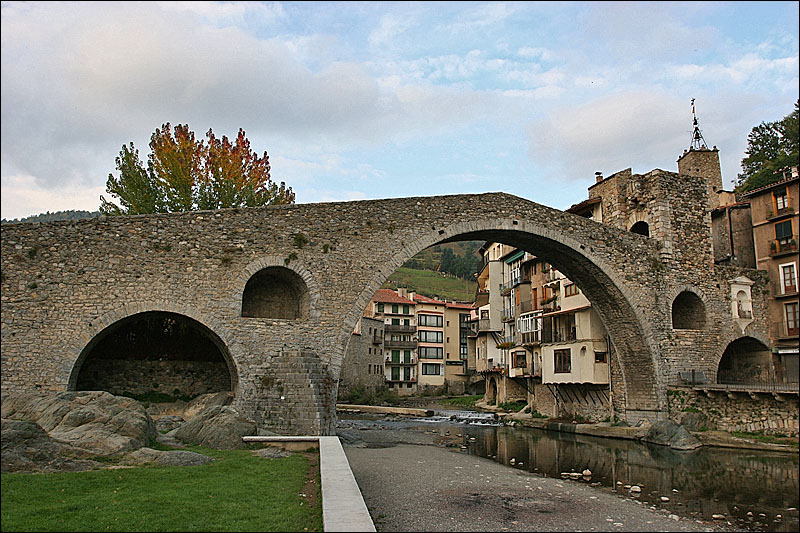