1. PATH OF THE RETIREMENT OF MOLLÓ TO PRATS DE MOLLÓ

At the end of the Spanish Civil War between 27th January and 13rd February 1939, between 85.000 and 95.000 people crossed the Pyrenees from Camprodon to the Vallespir into what was to become for many a long and arduous period of exile. Many of these refugees were initially looked after by the people of Prats de Molló and this town soon became a makeshift camp in which thousands of people were given shelter. This walk follows one of the many paths – whose existence in hindsight is no cause for celebration- taken by these refugees on their trek into exile.

The Natural Park of the “Capçaleres del Ter i del Freser”, located in the Ripollès region (Girona), includes the easternmost high mountain samples of the Catalan Axial Pyrenees, corresponding to the mountainous areas that make up the headwaters of the Ter and Freser rivers. It is a territory of remarkable orographic complexity and of great landscape diversity; factors that, added to an important extension and to the considerable altitudinal amplitude, allow the existence of very varied and rich samples of the geological structures, the ecosystems, the habitats and the vegetal communities, the species and the landscapes of this area of ​​the Pyrenees.

Since 2015, a total of 710 hectares of the municipality of Molló (16.5%) are part of this natural park, which runs from the Costabona sector and the Ritort River Springs to Coll d’Ares, following the careening border of Vallespir. It is a sector of high interest for the natural and cultural heritage, since it incorporates habits of interest associated with acidophilous grasslands (dry or high mountain) and with pine forests of black pine. Culturally, it includes an important gully (way of transhumance) and was the scene of the Retreat (1939) during the Republican exile, which crossed the border at the height of Coll d’Ares and Coll Pregon.

The first written document where the name of Molló appears (Mollione) dates of 936, year of the consecration of the church of Santa Cecilia, but it is known that the Molló church was already working, or was about to work, in 904. It is necessary, therefore, to situate the origins of Molló in the first steps of the forestation of Catalonia initiated by Guifré lo Pelós. At the end of the 9th and 10th centuries the repopulation of the valleys of the Ter under the rule of the Count of Besalú was carried out, and finally in 1141 it passed under the protection of the monastery of Ripoll. The year 1428, the municipality was shaken by a strong earthquake, which destroyed many houses and part of the church of Santa Cecilia, which was later rebuilt. The parish church of Santa Cecilia is a magnificent Romanesque construction, open to the four winds. Date of the end of s. XII and is a building formed by a single ship of considerable dimensions finished in a semicircular apse, much narrower than the nave.

In 1952, during the works of restoration of the belfry, the capitals of the windows of the upper floor were replaced by two oculi on each side. It is very remarkable the entrance portal, the wall of noon, practically lacking sculpted elements. On the archivolts and the tympanum, smooth, we find a wide decorative crown, formed successively by a horizontal cylindrical cornice, a frieze of saw teeth, a rosary of blind arcuations supported by small zoomorphic corbels, a second sawtooth frieze and, finally, an impost decorated with stems. This set is built on a projecting wall, attached to the wall of the nave, and under a small eaves on the roof. Inside, we find two shallow chapels, which point just a beginning of the cruise. Its shallowness can also be seen from the outside, where only walls of the same thickness as the one that housed the doorway can be seen. Inside the temple there are some pikes from different eras. Another important element that completed the set, the door decorated with iron shapes, disappeared during the Spanish Civil War. Today, only a large bolt in the form of a snake is preserved. 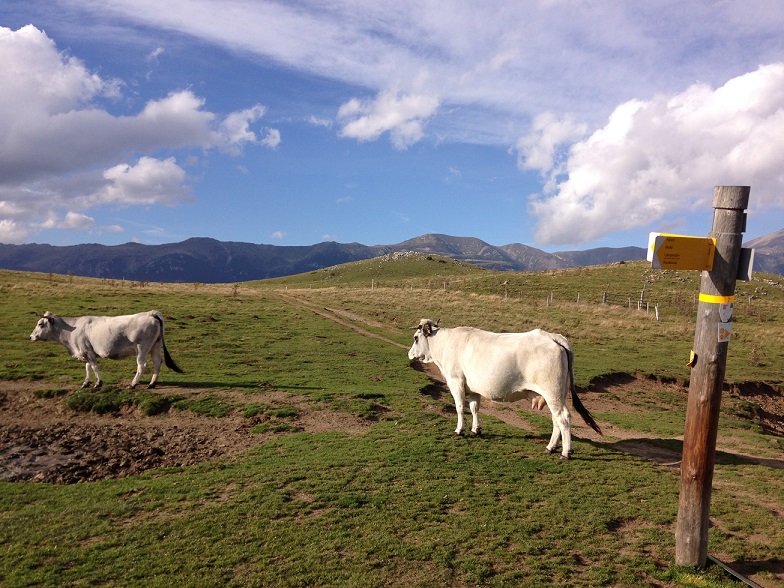