The Secret of CALDES DE MALAVELLA

Caldes’ hot springs are certainly a remarkable feature and have shaped the fabric of the town since ancient times. Its streets, squares and gardens are full of heritage that reflects the historical legacy forged through the close link between these springs and the towns’ inhabitants including the Roman thermal baths, the spas, the Art Nouveau houses, and areas for wandering around.

At present, in Caldes de Malavella there are three places where thermal water emerges at an average temperature of 56°C:

In the municipality of Caldes de Malavella there are unique nature trails providing over 140 km of signposted path. Caldes’ location on the Selva plain allows for the coexistence of Mediterranean and Central European features that have bestowed it with unusual biodiversity. Both the Route to Sant Maurici and the Thermal Route greenways pay special attention to their roots in Caldes. 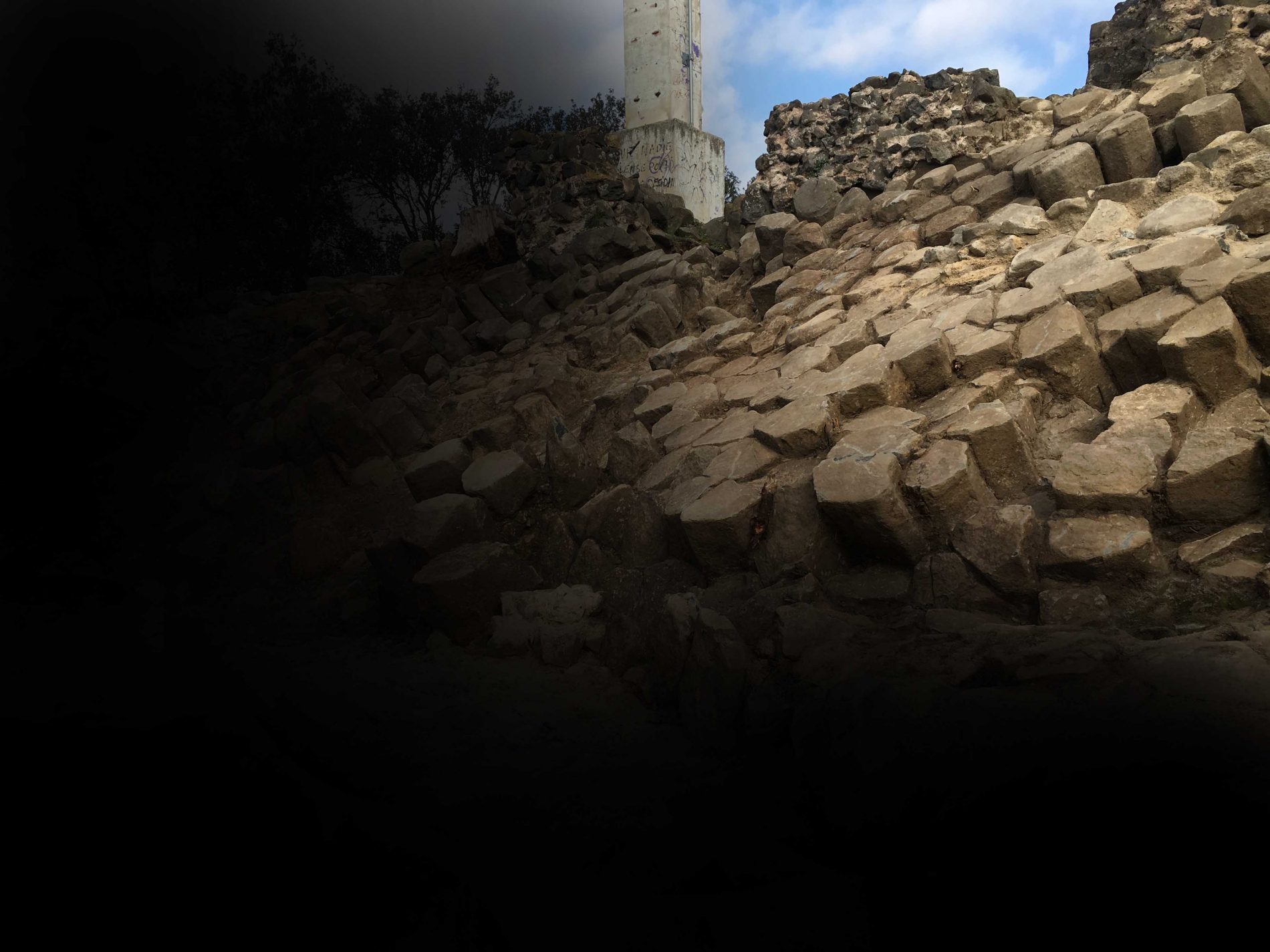 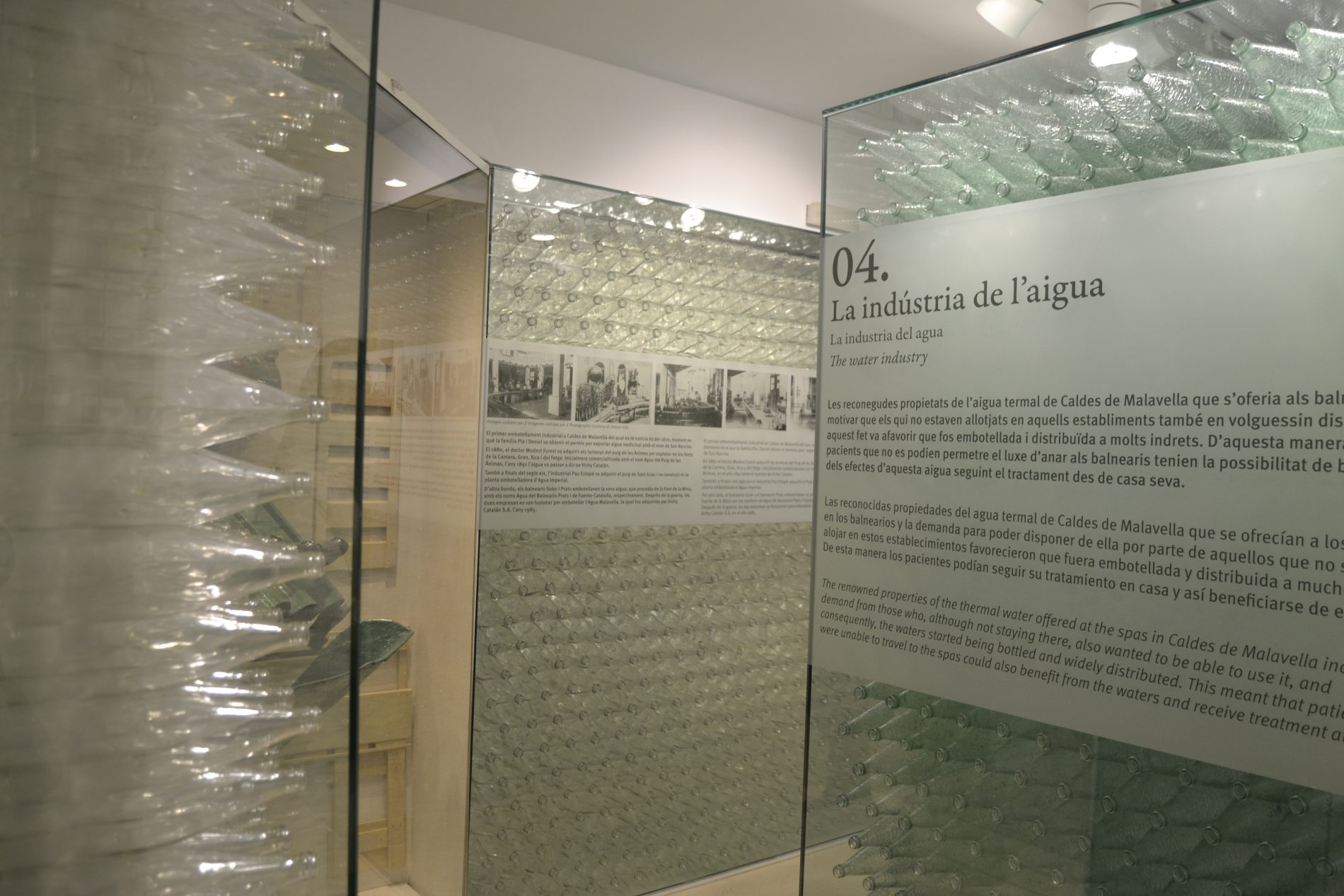 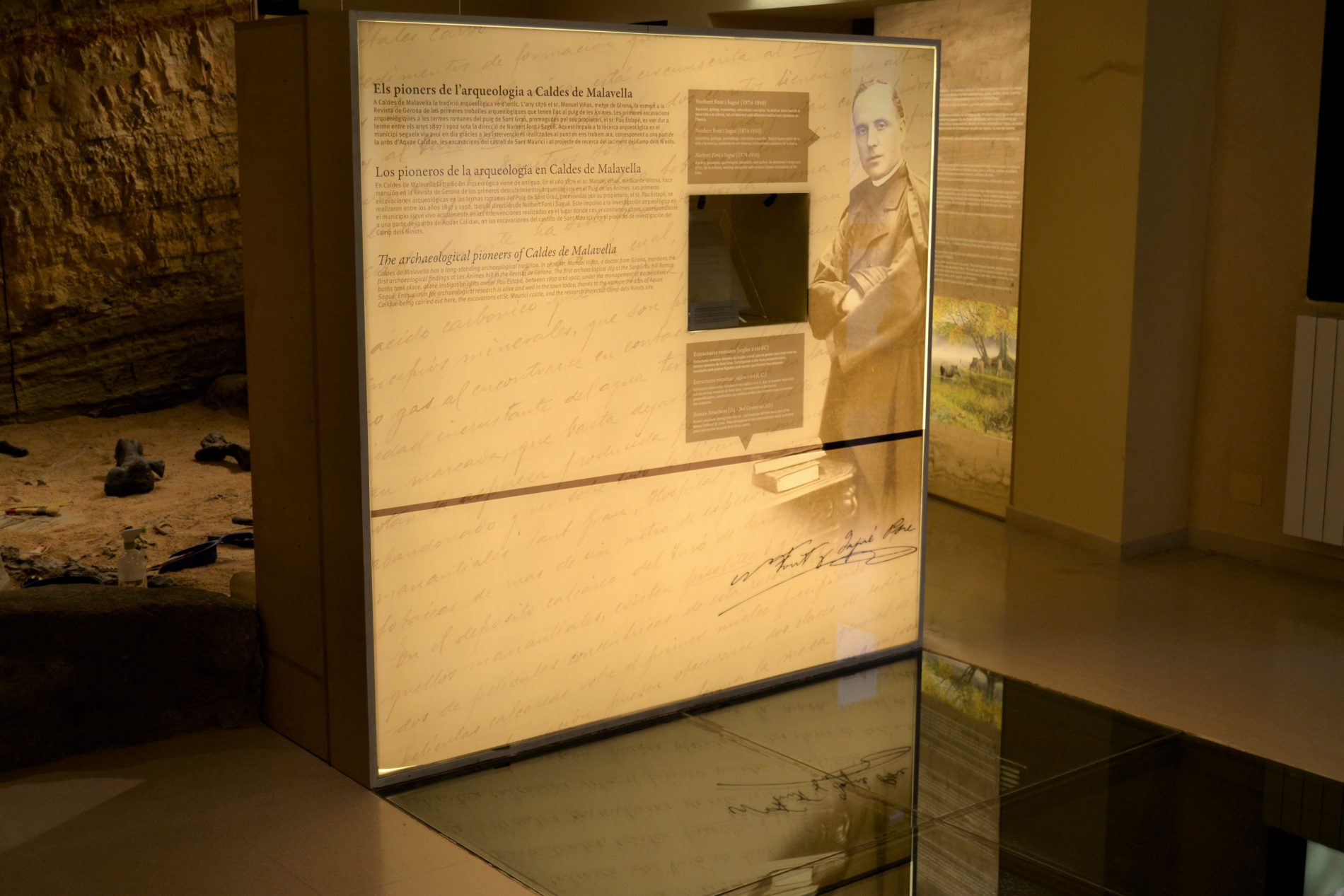 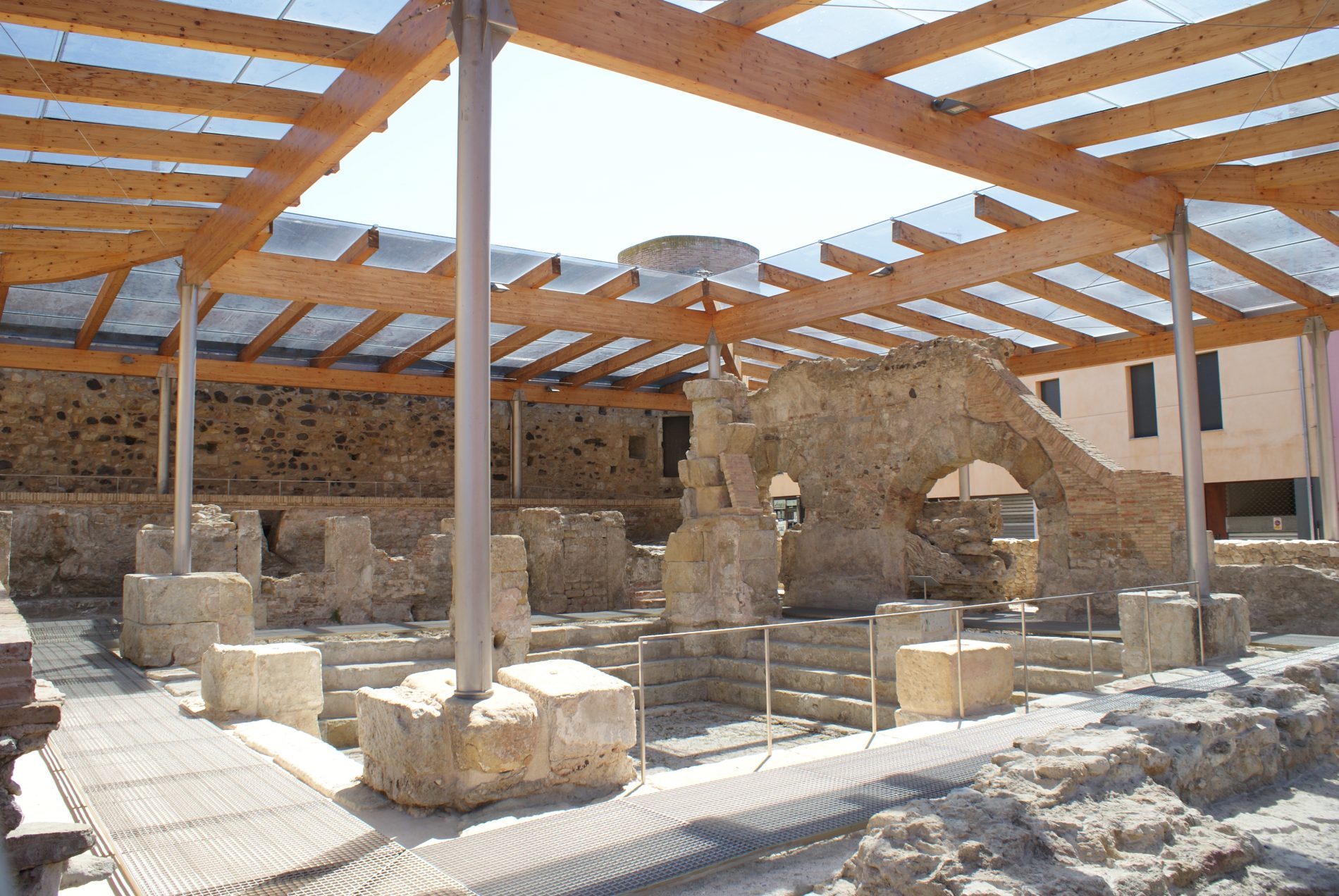 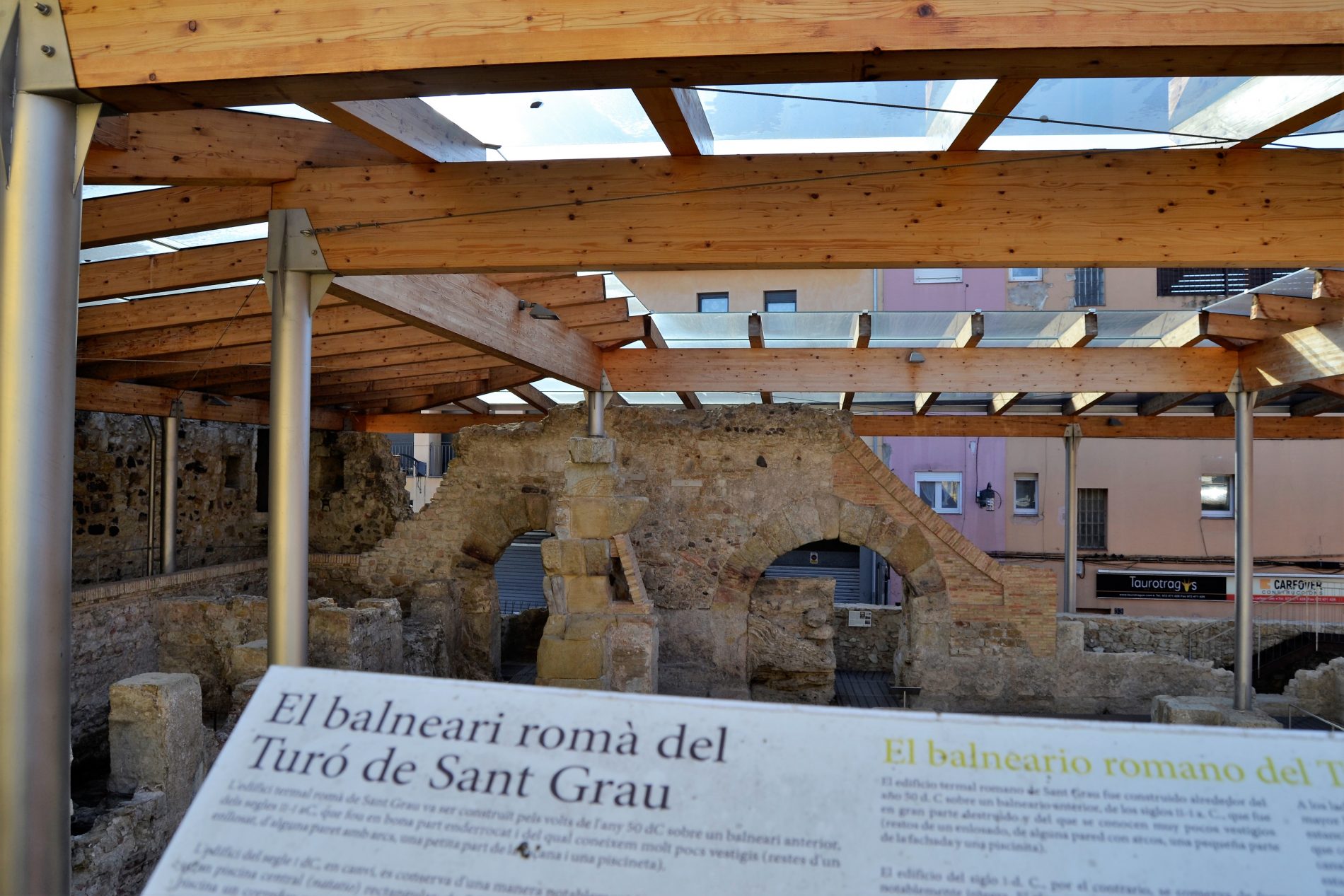 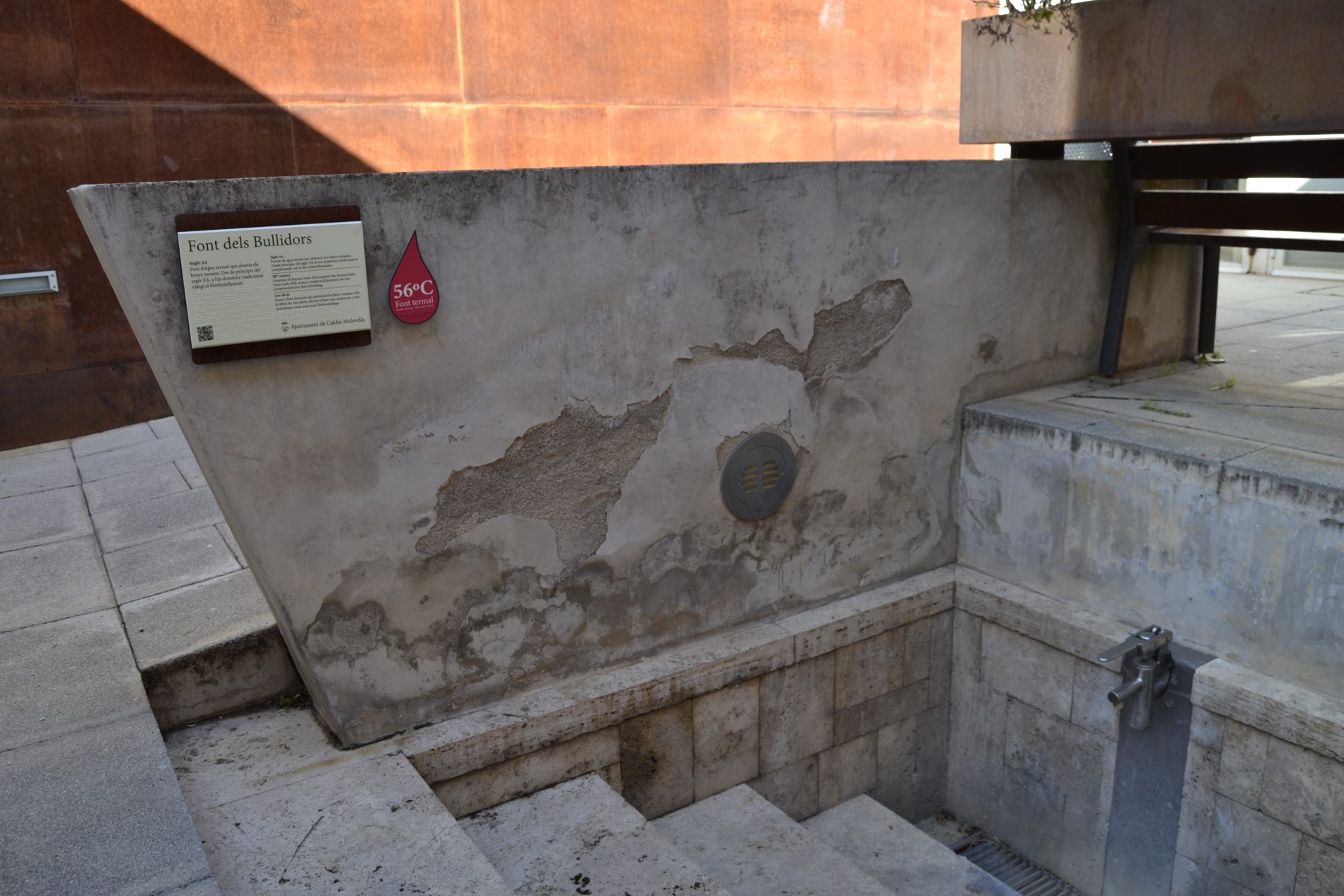 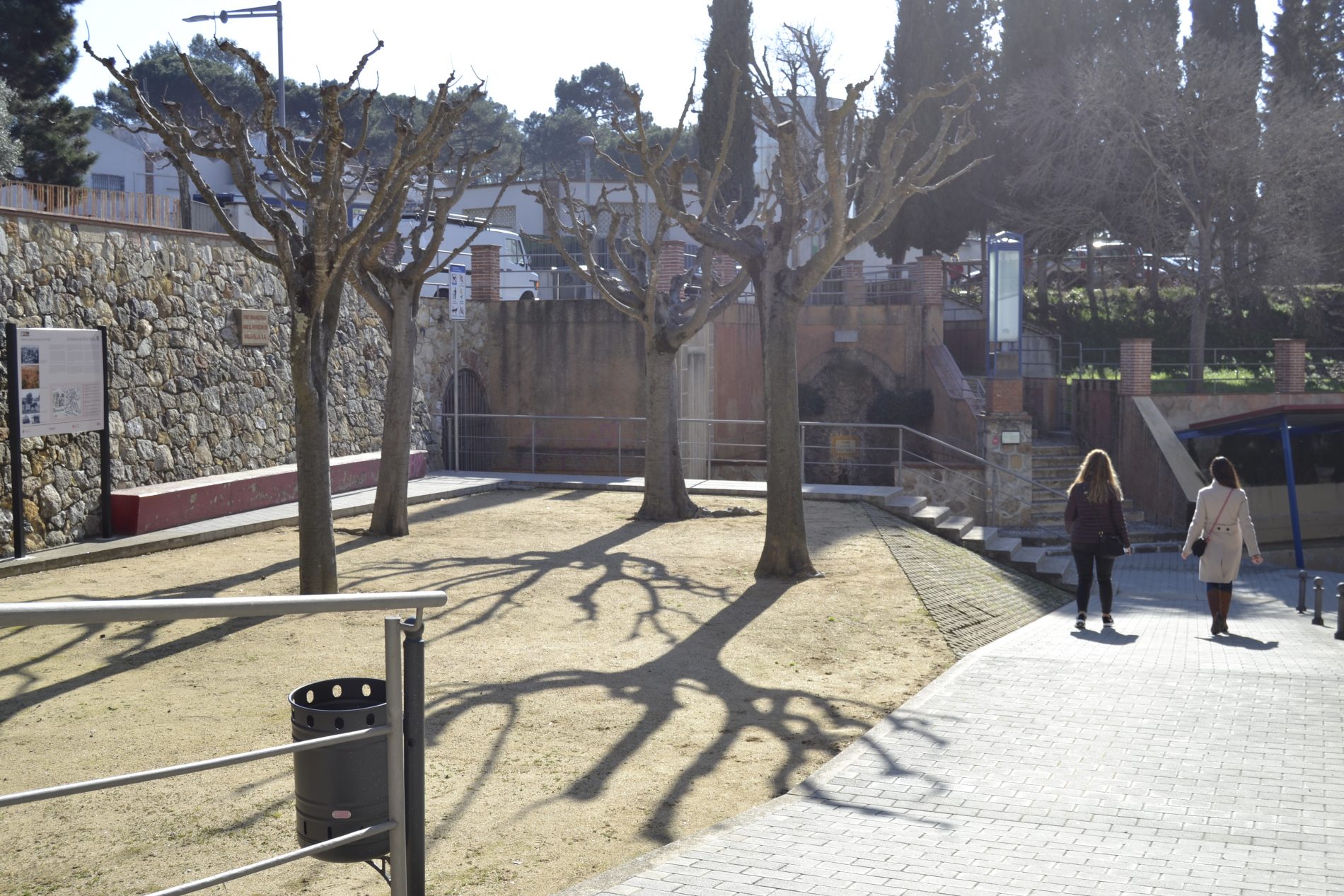 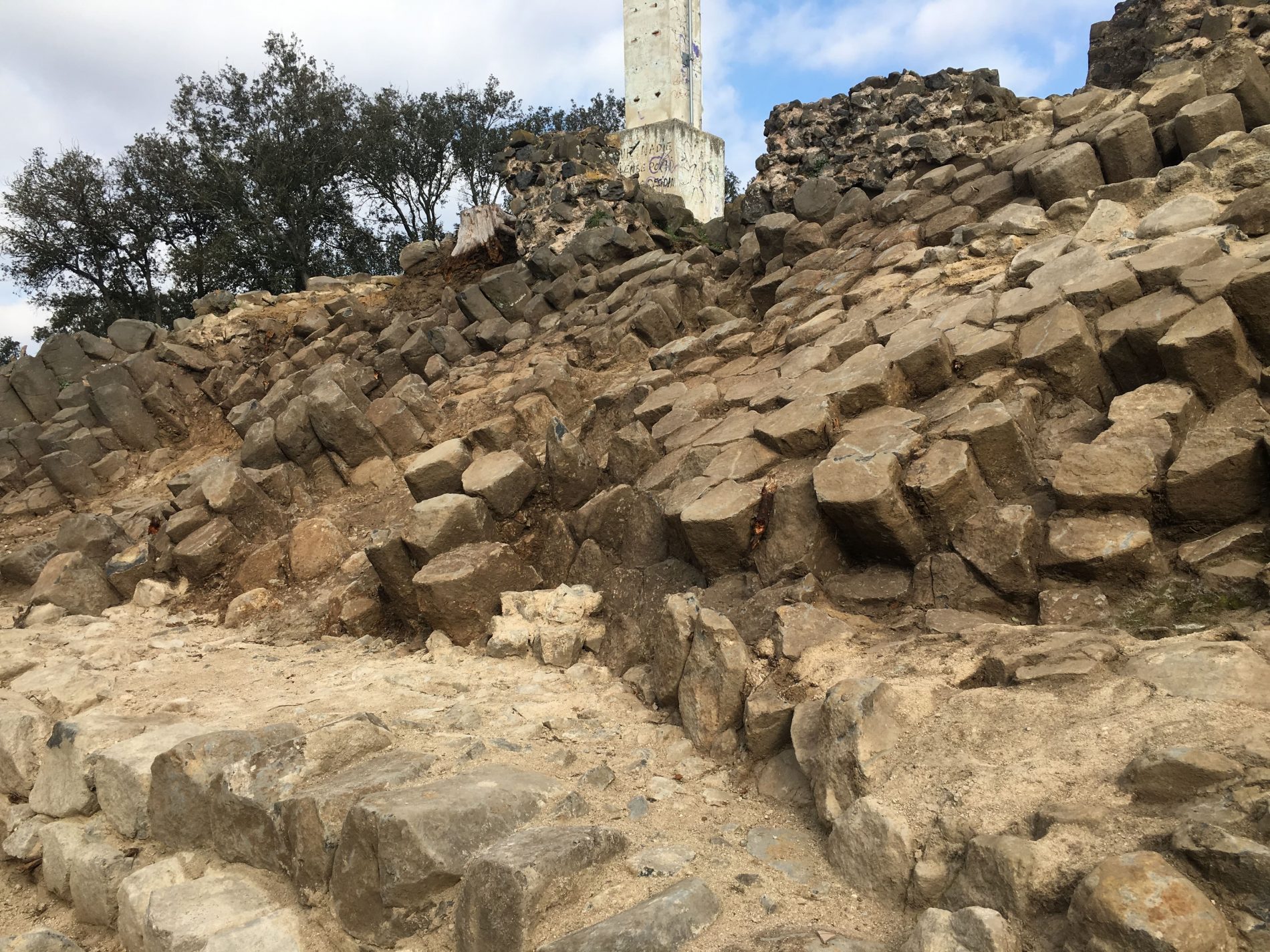 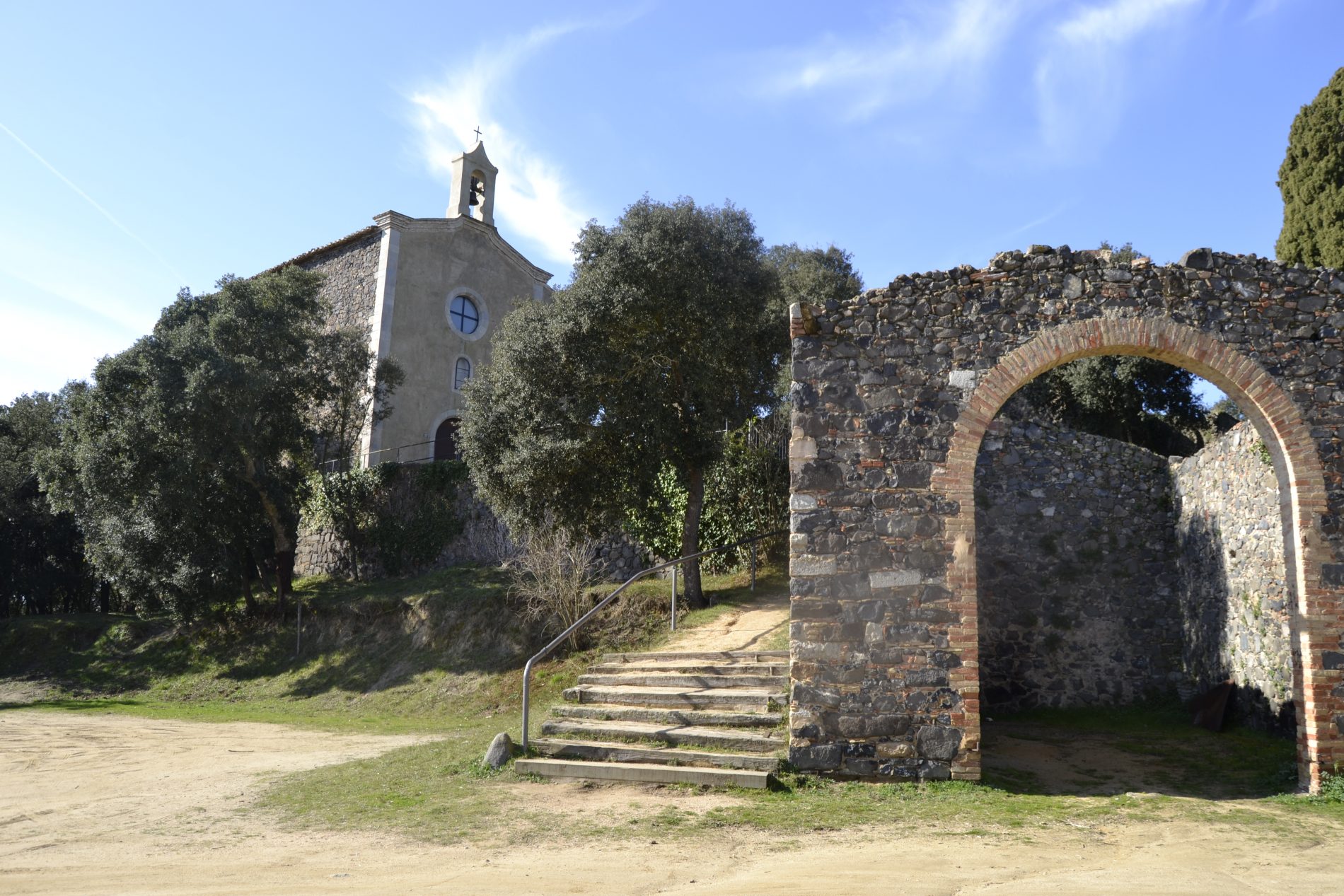 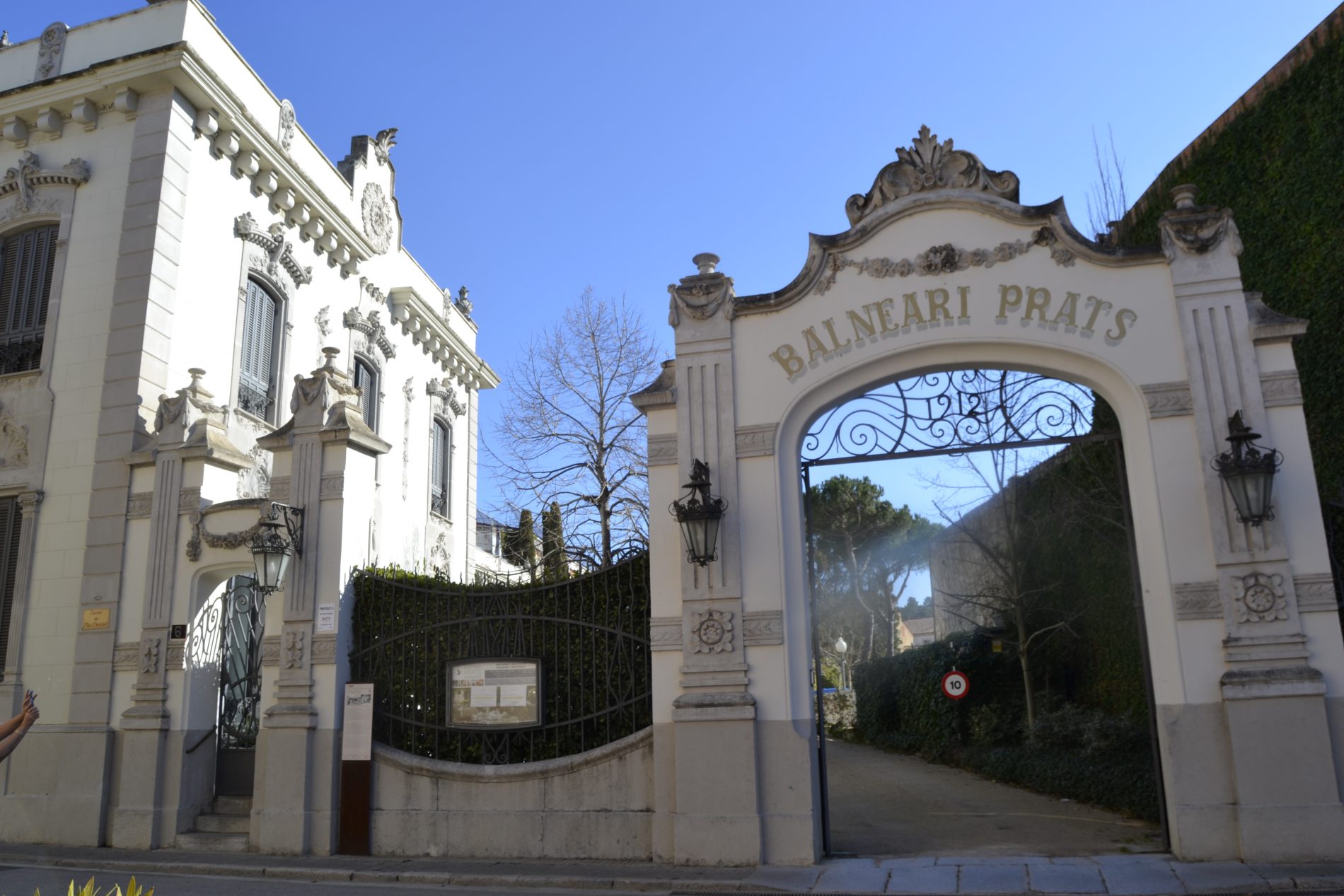 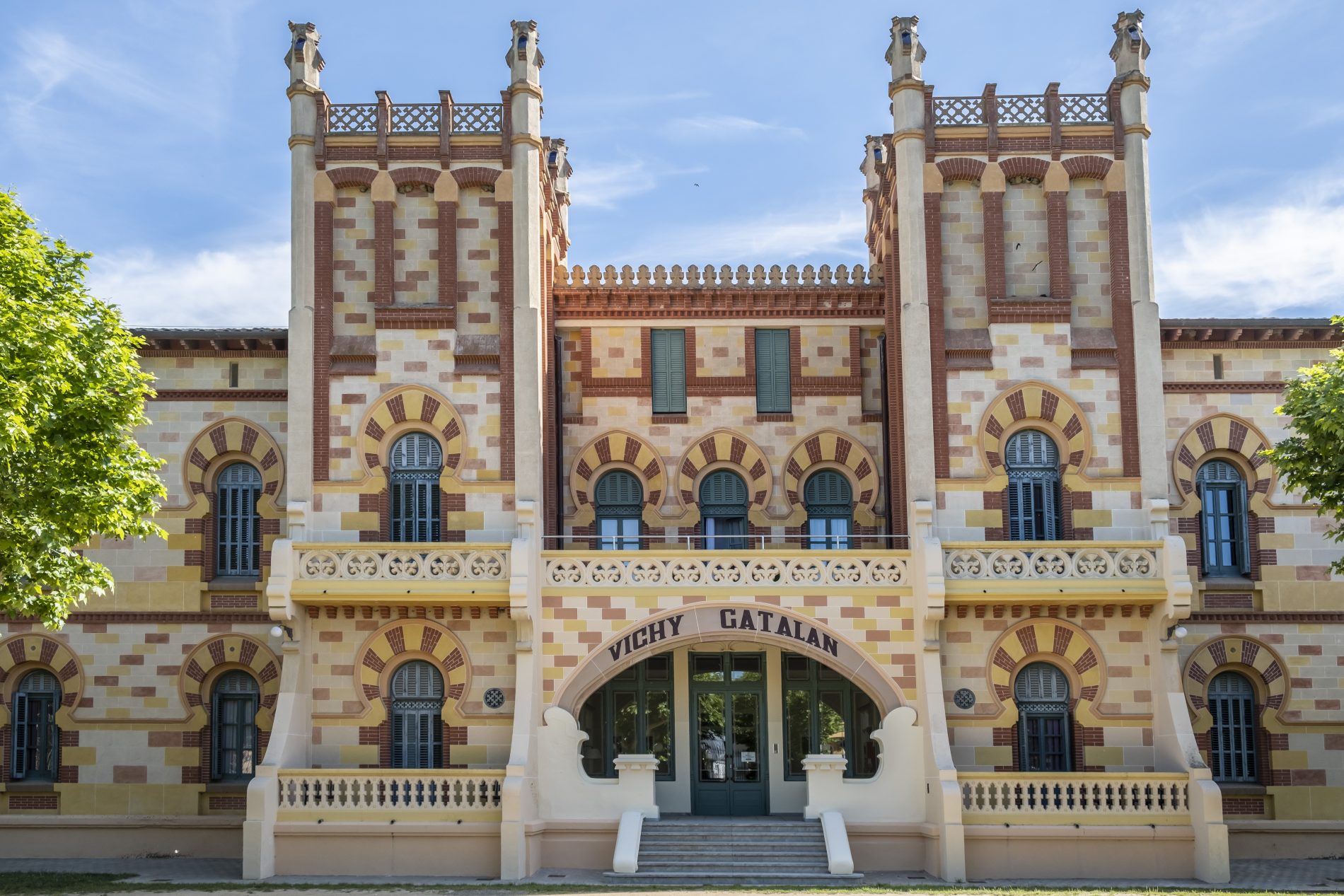 The Thermal Route greenway owes its name to the fact that Caldes de Malavella’s history is forged and characterized by its thermal waters. So much so that, following the route through the town, you get to see the hot water fountains, bottling plants, spas and heritage assets that owe their very existence to this feature of Caldes, such as the Roman thermal baths at Puig de Sant Grau, the remains of the town of Aquae Calidae and the Art Nouveau buildings linked to the emergence of late 19th-century spa activity.

At the heart of the town’s historic centre, you can visit the Espai Aquae museological centre, which aims to offer a comprehensive overview of the town, from the geological formation of Caldes, through the ancient period, up to today, with the industrial exploitation of water and the excavations at the Camp dels Ninots palaeontological site.

Just a few metres from the urban section of the Thermal Route you can also find the Tourist Office, which is the starting point for various walks through the historic centre, such as “Heritage and fountains” and “Caldes in times of war, 1936-1945”, with the story of the Italian sailors and Nazi spies who took refuge in Caldes in the mid-20th century.

It would make no sense for a place like Caldes de Malavella not to have at least one legend attached to its history. A place as fantastic as Caldes, the origins of which are lost in time, where miraculous water springs out of the earth, perhaps from some fantastical origin, offers – it could not have been any other way – one of the most famous popular legends, which, according to some, could have given the town part of its name: the legend of Malavella.

The legend of Malavella is situated in the magical location of the castle of Malavella and the chapel of Sant Maurici. There, a feudal lady, who was both evil (‘mala’) and old (‘vella’), was vanquished so as to free the population of Caldes from the abusive taxes she had imposed on them, and to put a stop to the constant disappearance of the children of Caldes. (For more information about the legend of Malavella see: www.festadelamalavella.com.)

To get to the top of Puig de Sant Maurici you have to follow the mountain bike route to Sant Maurici: it is a 8.6 km long circular route (route number 15 at the Selva Mountain Bike Centre). This can be made into a linear route if you go back the same way you came once you reach the top, which is about 2 km from the town centre.

Following the Thermal Route through the town, you can see three natural hot mineral-medicinal fountains where water emerges from underground at an average temperature of 56°C: La Mina or Raig d’en Mel, Sant Narcís and Bullidors.

Next to the La Mina water fountain the old municipal clothes washing areas (‘safareigs’) can be found. These are filled with the spare hot water overflowing from the fountain. In the mid-20th century, while Italian sailors sought refuge there, the safareigs and the drying racks became a focal point for interactions between villagers and newcomers. As the writer Rafel Nadal explains in his novel El fill de l’italià, the first emotional ties between people from these different parts of Europe were forged there.

The Espai Aquae in Caldes de Malavella is an innovative museological centre located in the old castle of Caldes, of which a stretch of rampart and three medieval towers have been preserved. The museum space combines research, education and the interpretation of Caldes’ heritage. It offers a tour, covering 9 exhibition rooms, of the natural and cultural heritage forged over time by its waters.

Guide services can be hired.

The Roman thermal baths are a historic monument that has been declared a Cultural Asset of National Interest. The baths were built in the first century AD and are the best preserved remains of the Roman town of Aquae Calidae, the current Caldes de Malavella. A pool and some of the annexed buildings have been preserved to this day; in addition, the water mechanisms that were used can also be seen there and remain almost completely intact.

The monument is open, and entrance is free so you can walk around it with the help of the information boards and signs erected there.

Caldes de Malavella is a historical hub of hot springs that offers a peaceful and relaxing atmosphere. The Balneari Prats and the Balneari Vichy Catalán, the two prestigious spas of Caldes, with their refined architectural forms with Art Nouveau and neoclassical details, welcome you to enjoy their treatments.

The first known documentary evidence of the Malavella castle dates from 1054, from a deed for the transfer of land signed by Countess Ermessenda. Here, the castle is referred to as “castro vetulo”. Three years later, in 1057, it is referred to as “castro quod dicunt Malavella” in an oath made to Countess Almodis, wife of Count Ramon Berenguer the First, the son of Ermessenda.

The castle was built on high land with good views of the territory. Its origin stems from the repopulation of these lands after feudal custom. Its remains, which date from the 12th century, are black. The colour comes from the basalt stones that form the hill itself, the remains of an ancient volcanic vent.

In Caldes de Malavella there are several striking volcanic outcrops. The most important of these according to size is located at Puig de Sant Maurici, where you can see a volcanic vent forged by the eruption of magma, gas and projected material. This vent is made up of hundreds of 4.4-million-year-old basaltic prisms.

You can see how the walls of the castle were built using these basaltic prisms, making the most of resources that were close-to-hand and, probably, reducing quarry worker costs.

The chapel of Sant Maurici

This chapel was built in different stages during the medieval period, due to the need to increase the capacity of the old chapel attached to Malavella castle. During the 18th century, the façade and the steps leading up to the church were built, giving it a stately appearance it did not have before. It was, and still is, used as a centre for gathering together the inhabitants of the surrounding area and is much appreciated by Caldes residents. Every year, on the 22nd of September (a local holiday, Saint Maurice day), there is a well-attended gathering involving religious celebrations, a village lunch and sardana concerts. 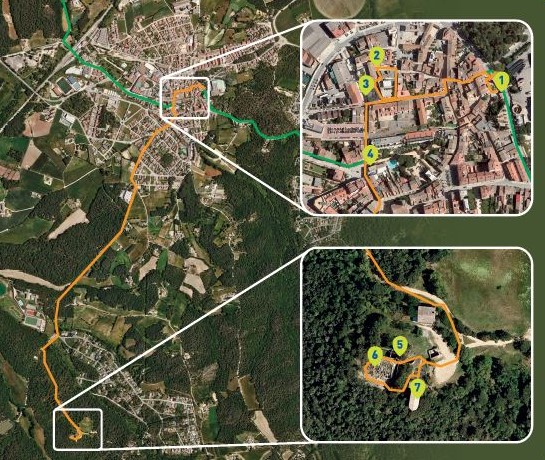 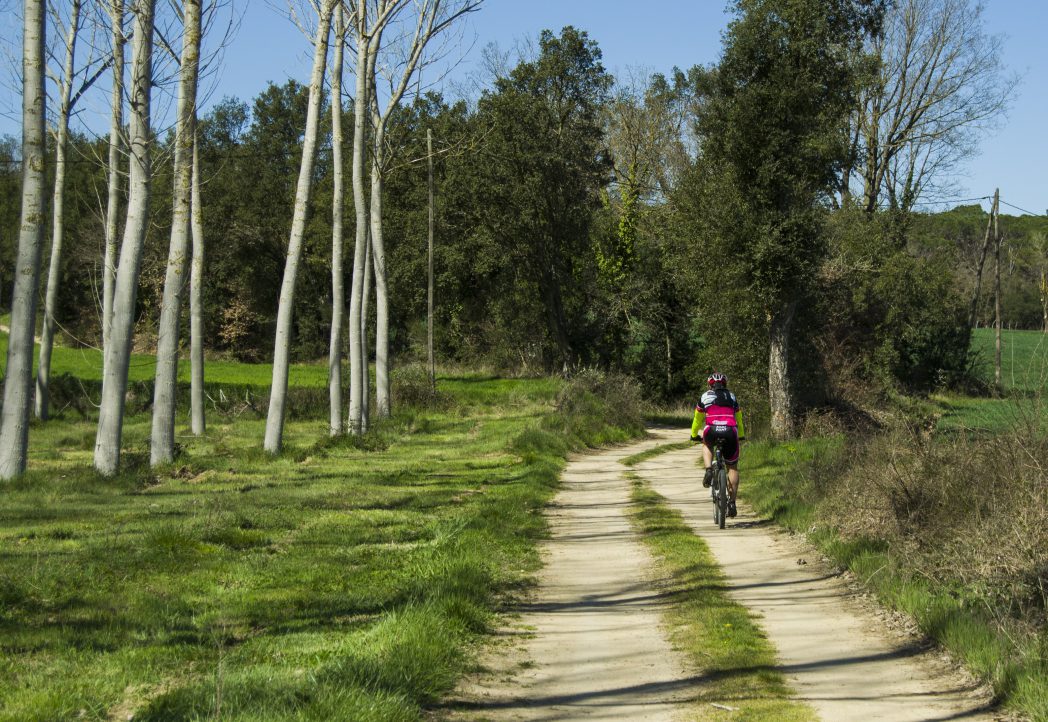